DEATH NOTE Anime ReviewDeath Note. Another famous anime. But this time there is one reason for it. In fact, there are lots of good reasons but they can be summed up in one thing: this anime is amazing. Want to know why? Then just keep on reading.

Story (8): The first half of this anime is a masterpiece. The concept itself - the Shinigami's notebook which grants the person who has it the power to kill anyone by simply writing the person's name while picturing the face in his mind - is already brilliant to begin with as it presents the viewer questions like "What would I do if I had that power?" The way it is developed brings us yet more questions and defies our morals.Light Yagami, the main character, is a brilliant high school student who's angry at all the injustice in the world. One day, he finds the notebook and he tries it out. At first, he's not sure about if what he did is correct but he ends up loving the power he got and trying to use it to build a new and better world. He's nicknamed as Kira by the citizens. Of course that would simply be boring if it wasn't for L, a detective that tries to discover Kira's identity. Both of them are simply genius and their counter clock run to find out each other's identity is full of intelligent moves and suspense which kept me trying to guess what each one of them would do next.Really, the simple ingredient that's so great about this story is that it manages to keep you thinking. But at several levels. Let me explain that to you.First, it makes you think about if what Light's doing is right or wrong. "Is it right to be the judge and executer simultaneously?" "Don't the circumstances of each crime matter as well and is it right to judge without knowing all the facts?" "Can't the criminals be reformed?" "Is a world where people don't commit crimes because they're simply afraid really desirable? Isn't what Light aims to achieve theoretically similar to a dictatorship?" Those are questions that ran through my mind. At one point, I was totally rooting for him. But as the story develops and his actions begin to change, you'll start to wonder...Second, it makes you think about what's going to happen next. Trying to follow Light's and L's line of though is both challenging and entertaining. Their move will surprise you and you'll keep trying to guess what they're gonna do next. This show will keep you on the edge of your sit through its entirety.Third, it changes the way you see the world and the people in it. With each kill and each action Light takes you can't help but wonder: "It may be wrong but what would I do if I were in his place?". People change, situations make us change. One different thing in your life and you could be going from a dedicated doctor to a serial killer (just an example).The only problem with the story is really the second half, for Near isn't nearly as intelligent as L, and Light seems to become way dumber and make pointless decisions rather than retaining control of the situation. The fact that the resolution didn't steam from Light's mistakes but from someone else's and was pure luck on Near's part in that regard was both a nice factor (I was rooting for Light to win because... no idea, I just was.) and a rather underwhelming one as well, for neither of them was the central piece that ended the puzzle. The story receives a 8/10.

Art (9): The art is clean, the character designs are both unique and somewhat similar to reality. The backgrounds are detailed enough and the animation is really good. Even though there are few action scenes throughout the show, the car chasing scenes for example are really well done. A little exaggerated, yes, but nevertheless pretty good.But were the art really shines is in the coloring schemes. The dark and dull tones totally fit the anime. And Light's monologues, with the red hair also add a nice touch.Quite good for its time and genre.Sound (9): First, let's talk about the openings and endings. Well, I dislike both openings and love both endings. Quite wired isn't it? Because you know, the 1st opening and the 1st ending are both by the band "Nightmare" (they're a really good band by the way) and the 2nd ones are both by "Maximum the Hormone". Still, it's just my personal preference though some people may be turned of by the heavy metal sound of the last opening and respective ending. The ending song from episode 37 is really beautiful and fits the last scenes awesomely well.But that's not all. The opera-like songs that pass in the episodes really add to the scenes and were, with they're somewhat religious tune, the best choice to set the mood.I can't say much about the voice acting. I watched the english dubbed version and I thought it was good enough but I'm no expert on that matter.

Characters (8): The characters are rather well portrayed. Let me put it this way. When I see an anime, there's always a character that stands out the most for me, that has characteristics that make me root for him/her. When that doesn't happen, I usually don't enjoy an anime. In Death Note, no character stood out. But somehow, I still loved it. I think no one stood out because they were all equally great. There was no one with fantasy-like characteristics. They all seemed like real people with real problems. No unneeded and exaggerated tragedies but no totally sweet lives either.The character development is pretty much nonexistent for most of the cast, but it doesn't need to be there, for it is really good for Light Yagami, the main character. Starting of as a genius, calm and collected high school student with a strong sense of morals and justice, he undergoes a slow but drastic change of character. The more he uses the Death Note, the more he slowly drops his morals because he finds it is needed to continue his work. He ends up an arrogant person with no consideration by the people who surround him. He starts trying to create a new and better world for people to live him but ends up obsessed with power and with being the "God of the New World".I love it when Light loses his memories about the Death Note. He turns back to his old self, refuses to use people as tools (what he had been doing all the time) and he even thinks Kira is wrong and wants to catch him. At that point, I also thought Kira's actions were going way too far but so did Light. And Light WAS Kira. So what if the notebook was real, what if I had pick it up? Wouldn't I do the same and end up like that?Moving on to L. He may seem like a plain character, but he is not. He tried his best to capture Kira risking himself a bit more in each attempt. He seems cold but deep inside I think he really didn't want Light to be Kira because he had never met anyone so similar to him in his ways of thinking and he saw Light as a friend, even though he was almost sure that Light was, in fact, Kira.The support characters are surprisingly interesting, despite not being all that well developed. I'm talking about the task force. At first, we didn't know much about them and they're development is not much noticeable but then at some point you realize you already know how they feel about Kira, what their line of thought is. The truth is, we subtly get introduced to their problems and internal struggles. This anime has an interesting cast of supporting characters.My least favorite character was Near. Even Mello was better developed than him. Near wanted to catch Light, sure. But it seemed like he was barely concerned about anything else that was happening as long as he could catch him. He was too cold and underwent none changes.

Enjoyment (9): This review is getting way too long... Anyway, I really enjoyed this anime. Each episode got me craving for more. It made me think, it made me feel bad for some characters, it made me hate some situations... It was truly a great viewing experience. I enjoyed it a lot. Biggest problem was really the second half not being as intelligently scripted as the first one. But even now, one month after watching, I still think about Death Note and its moral changing story whenever I see some hostage situation on the news. Sometimes I'm just like "Damn, I wish I had one notebook like that! I could prevent so many bad stuff from happening...". And then, on those nights, as I'm in my bed the same questions I had when I was watching the show come once again to my mind. "If the notebook was real, wouldn't it bring even more bad things that it could prevent? Would it be right to use it? What would guarantee that I would not get corrupted by its power?" I loved this show and I still do.

Overall (10): I recommend this to anyone. Whatever genre of anime you like, you should watch this. It is a really intelligent story and even though you may not love it as much as I did, the chances are, you will. Even for people who never enjoyed anime, I would still recommend it. In fact, I am now in the process of making Portuguese subtitles so I can get my mom to watch it. Death Note defies your morals and enables deep discussions with yourself and others. It truly is a great show. 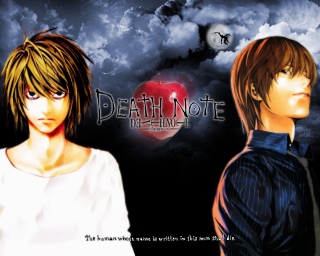 Posted by DrSHREEVEERA at 6:30 AM